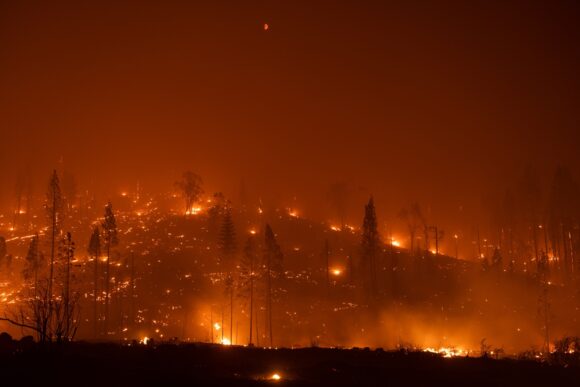 There are over 10,000 firefighters battling unprecedented blazes in California, but that isn’t enough, and the state is having a hard time finding more as flames rage across the western U.S. and Canada.

In a bleak sign of climate change, the infernos are part of a dramatic wildfire season spanning the Northern Hemisphere, with flames burning everywhere from Siberia to Greece and France, and smoke reaching the North Pole for the first time on record. There are about 100 large, active fires across the western U.S. alone, so finding additional resources for California is difficult, and the firefighters deployed are exhausted. The pandemic has also made cross-border aid harder.

The U.S. West has been gripped by a decades-long drought so severe that Colorado River water will be rationed for the first time, and Southern Californians are being asked to conserve. Western Canada, which typically sends crews to help with U.S. wildfires, smashed the country’s all-time heat records this summer and has flames burning from the Pacific Coast to the other side of the Rocky Mountains.

Some 6,500 federal firefighters already are deployed to California, Scardina said.

California has tapped National Guard members from as far away as Louisiana and West Virginia to help. But the state isn’t able to pull in firefighters from other countries as easily as it once could, said Thom Porter, director of the California Department of Forestry and Fire Protection, or Cal Fire. The ongoing coronavirus pandemic has limited the ability of other countries to send help. And crews from Mexico are already battling Canada’s fires.

“We’re having a very difficult time,” Porter said. “There are resources out there that are being shared internationally, but those resources are already committed.”

Conditions improved somewhat Wednesday, as the National Weather Service canceled its red flag warning for parts of the San Francisco Bay Area while leaving it in place for other northern parts of the state. High winds Tuesday prompted California’s largest utility, PG&E Corp., to cut power to about 48,000 homes and businesses in 13 counties to prevent electrical lines from sparking more blazes if they toppled from high winds. More than half of those customers had power restored by Thursday morning, with the rest expected to be back online by evening, the utility said.

The winds helped fuel the Caldor Fire’s startling growth, and state fire officials on Wednesday pulled crews off of other blazes to fight it. Investigators haven’t determined how many homes burned in Grizzly Flats, population 1,200. The Associated Press reported that fire officials estimated at least 50 homes had burned in the area.

“This has been an incident that developed really quickly and has grown extremely fast,” said Mike Blankenheim, a unit chief with Cal Fire. “It’s outpaced the models on a two-to-one basis.”

But the same winds also kept other fires growing. The month-old Dixie Fire in the northern Sierra Nevada Mountains has now become the first known blaze in California’s history to burn all the way from the range’s western foothills, up over its crest and down into the valleys to the east, Porter said.

“We don’t have any record of that happening before,” he said. By late Wednesday, the Dixie Fire had scorched 662,647 acres and destroyed more than 650 residences, Cal Fire said on Twitter.

Error! Filename not specified. A hillside burns during the Caldor Fire along Mormon Emigrant Trail near Pollock Pines, California, on Aug. 17.

This has been one of California’s worst fire seasons ever. On Monday, the state broke a milestone of 1 million acres burned, the earliest it has ever reached that mark. So far this year, 6,540 fires have torched at least 1,800 structures in the state. But no deaths were reported through Wednesday.

Across the Northern Hemisphere, wildfires are sweeping areas left unusually dry this summer by drought and extreme heat blamed on climate change. A wildfire burning near the French Riviera killed two people this week and injured at least 27. At least five people have been killed this month by wildfires in southern Italy. And a blaze outside Athens is forcing villages to evacuate.

As drastic as California’s fire season has been so far, it is still weeks away from its peak, when the Santa Ana and Diablo winds start to blow from the east. As summer weather patterns give way to fall, large high-pressure systems typically build over the Great Basin of Nevada and Utah, sending winds rushing from the east to low-pressure systems that often develop off the Pacific coast.

These winds dry out and heat up as they cross California’s mountain ranges, allowing them to fan any sparks they catch into major fires. Four of the state’s five most destructive fires occurred in October and November.

The danger often doesn’t pass until winter rain and snow squelch the flames. But the possibility of another La Nina event this fall and winter, the second in as many years, could bring California another dry winter.

Temperatures will linger in the 90s Fahrenheit through the rest of the week in the Sacramento area, said Emily Heller, a meteorologist with the National Weather Service in Sacramento. Air quality alerts due to smoke pollution have spread across the West, including through California’s Central Valley and covering almost all of Idaho and Wyoming. Smoke can make it harder to fight the blazes by limiting the ability of aircraft to drop flame retardant.

State officials urged residents to pay attention to the speed with which fires are spreading and to be ready to evacuate if needed.

“Remember every acre in California can and will burn some day,” Porter said. “Just make sure that you’re ready when it does.”