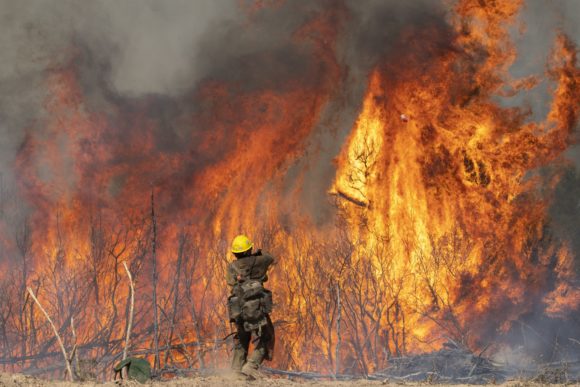 Pacific Gas & Electric said its equipment may have been involved in the start of a small wildfire that merged with the massive Dixie Fire now threatening homes in Northern California mountains.

The U.S. Forest Service was examining a tree found on PG&E power lines near the town of Quincy in Plumas County where the Fly Fire began July 22, according to the PG&E’s report to the California Public Utilities Commission. The smaller blaze burned through more than 6 square miles of forest before combining with the much larger Dixie Fire two days later.

Two weeks ago, PG&E told regulators that the Dixie Fire may have been ignited July 14 when a tree fell on another one of its power lines near the Cresta Dam, west of where the Fly Fire started later.

The Dixie Fire, currently California’s largest blaze, covered about 388 square miles in mountains where 67 homes and other buildings have been destroyed. Evacuation orders were issued Monday for Greenville, a town of about 1,000 people, as strong winds pushed flames through Plumas and Butte counties. The fire was 35% contained.

It was burning northeast of the town of Paradise, where survivors of a 2018 fire that was started by PG&E equipment killed 85 watched warily.

PG&E equipment has been blamed for sparking some of the state’s deadliest wildfires in recent years, most notably in 2017 and 2018 when a series of wildfires burned down more than 28,000 buildings and killed more than 100 people. It emerged from bankruptcy last year after a series of deadly wildfires ignited by its long-neglected electrical grid prompted it to declare financial insolvency.

A Northern California prosecutor said last week PG&E will face criminal charges because its equipment sparked a wildfire last year that killed four people and destroyed hundreds of homes. Shasta County District Attorney Stephanie Bridgett said her office hadn’t yet decided which charges to file, but it planned to do so before the September anniversary of the Zogg Fire.

PG&E said in the report filed Sunday that it was cooperating with the Forest Service’s investigation.

“The data currently available to PG&E do not establish the cause of the Fly Fire,” the utility said, noting that the information in the report was still preliminary.

PG&E officials were scheduled to testify Tuesday during a previously scheduled hearing by the Public Utilities Commission on the practice companies instituting widespread power outages to prevent equipment from sparking wildfires.

PG&E, San Diego Gas & Electric and Southern California Edison were criticized for their chaotic and unprepared handling of shutoffs in October 2019. Regulators have blasted PG&E for a botched shutoff that left nearly 2 million people in the San Francisco Bay Area and Northern California without power. People couldn’t get information as websites and call centers crashed and local officials didn’t know what to tell panicked customers.

During a public safety power shutoff, a utility de-energizes its grid in order to prevent its equipment from failing and sparking a wildfire, often amid hot, dry and windy weather.

PG&E said earlier this month that it would bury 10,000 miles of power lines to help reduce the threat of them causing even more catastrophic wildfires.

The utility would be “tenacious in our efforts to stop ignitions from our equipment,” PG&E Corp. CEO Patti Poppe said in a statement Monday.

PG&E also said it would implement additional fire-prevention measures including a plan to respond within 60 minutes or less to any fault or outage on a power line in high threat areas. The company said it would identify which of its power lines run through areas most affected by drought conditions and perform extra safety patrols.

Extremely dry conditions and heat waves tied to climate change have swept the region, making wildfires harder to fight. Climate change has made the West much warmer and drier in the past 30 years and will continue to make weather more extreme and wildfires more frequent and destructive.

Firefighters said in July they were facing conditions more typical of late summer or fall.